It’s a nice cool 61 degree morning here on the coast of Maine, albeit a rather overcast day.  The clouds gathering above me in the sky are heavy and full of rain – which will surely soon be pouring down upon my thirsty gardens and lawn spaces, thankfully.

I am up. I got up at 4:30am after a few short hours of sleep.  I’ve been having the most insane dreams lately.  I’m not sure if it’s med related, stress related or just that I am fucking weird.  Again last night I dreamed of being in the Army once again, and this time being deployed to control riots surrounding the Charlottesville white supremacist rally.  Yes, my dreams are overlapping into what is happening in real life here in America.  If I were able I would re-join the Army in a heart beat, but I’m aged out at 55.  Even so, I still dream of being in uniform again every now and then.  I often lament that I should have stayed my ass in the military until retirement.  But back in the mid-80’s when I finished my tour of duty the climate around being lesbian and in the Army was not good.  They were still in the midst of having monthly “witch hunts” and “round ups” of gays and lesbians to throw out of the service just for being who they were.  I narrowly avoided a couple of those round ups because I did not use my real name back then.  Off-post I had an entirely different identity; living stealth in order to maintain my position with the Army.  I did not want to have to explain a discharge that was other than honorable to my father – a man I feared and respected; a man who said I did not have the “balls to join” the Army…yeah, I was busy showing him what a damned good soldier looked like!

I was saying, it is a fantastic start to my day here.  Life has been changing lately for me, as I mentioned briefly in previously posted blogs here.  I’ve been making changes, still growing and just relaxing more into myself and into life.  I’ve been trying hard to become more aware of myself; of my internalized phobias, and trying to work on those. We all have them, we try to deny it but it’s a fact.  I’ve been trying harder to think about what other people are going through or are concerned with and to be empathetic to those things.  I think it’s making me a better person.  I hope it is.

I have been getting out more the last few weeks.  Doing more by the way of social sort of stuff.  Generally I keep quietly to myself.  But I have realize that this isn’t doing my psyche any damned good.  Thus I have made more of a concerted effort to socialize and get the hell out of the house days.

On the 10th I went out to The Old Ferry Landing in downtown Portsmouth, NH with my whole family for a birthday dinner for my mother.  The Landing is right on the Piscataqua River, in Portsmouth Harbor.  It’s the very spot where the old ferry would land to bring passengers and freight back and forth across the river between Maine and New Hampshire up until the first draw bridge was built in the 1930’s.  So it’s a very historic spot, and when I am there I imagine what it might have been like for my grandmother to ride that ferry to town, which she did back then.  So it’s like walking in the footsteps of my ancestors.

Right next to the landing is the home of the Moran Tugs.  These tug boats are used to guide commercial vessels through the channels of the Piscataqua, one of the fastest current salt water rivers in the world, and through the two draw bridges that span the river.  There is a 3rd bridge, the “high level” we call it, that is high enough to navigate ships beneath, so it is stationary.  Right now the “middle bridge” of the Sarah Mildred Long Bridge, is being replaced.  It’s quite the project building a new draw bridge with all of today’s technology incorporated into it.  The project is the talk of the seacoast at this time.

Here are some good pictures of me, my family, the restaurant and the tugs.  Taken with my new Moto phone’s camera. 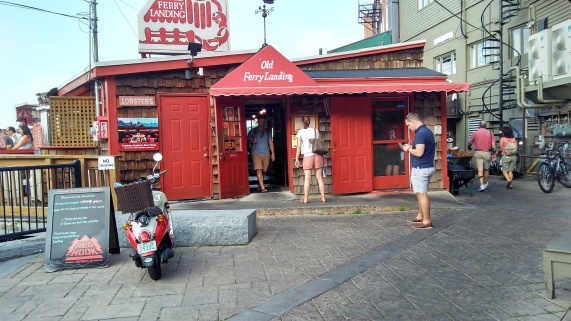 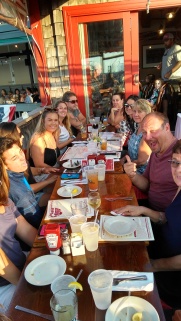 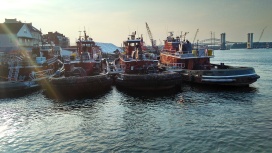 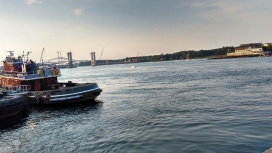 And while I was in the city (Portsmouth) I happened by a little shop that is owned by a dear old friend of mine. She is actually the woman who worked at the clinic where I tested positive for HIV back in 1992.  She is the one who had to break the news to my bewildered ass.  And I was the first woman she had ever had to tell they were positive.  So we have a sort of bond because of this happening to us back then.  We have always stayed in touch on the fringes, seeing each other at various outings, like Pride, Women’s March, and others.  Well, she dragged me into her little shop, which is for femmes let me tell ya, it’s full of jewelry, scarves, and hats…oh the hats…seems they were having a little “hat party” at the moment that I happened by on my way to the Ferry Landing.  Once inside they took great glory in having a Butch in their midst.  I got flirted with and poked fun of and then THIS happened: Yep, they made me try on one of the foofy hats…and they sure did get a laugh out of it, as did I.  I graciously allowed them to take this pic…so here it is for prosperity…and you all get a good chuckle out of it too.  🙂

This last Saturday I went up to celebrate my neices’s birthdays – Kyle and Meagan are both 23 this year…oy vey…and they often celebrate together as they are only 4 days apart in age.  Yes, 1994 was a very busy year for my family! lol.  It was the year I became an Auntie.  Auntie Butch…go figure. One of the proudest times of my life.  Here are some pics from the pool party we had Saturday. 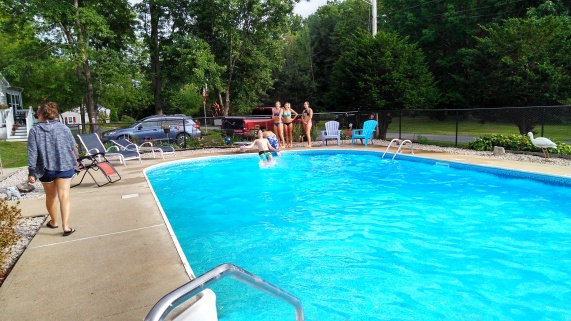 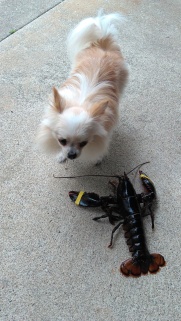 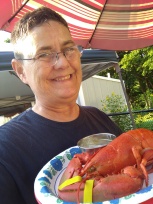 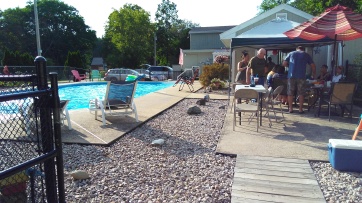 Yes, it was complete with fresh off the boat Maine lobsters!  And they sure were great.  They are hard shell right now and full of good meat.  I had a fun time sending pics of them to my girlfriend and freaking her out…she’s never had a lobster.  Soon…very soon.

Yes, you read that right.  Girlfriend.  I formally asked her to be my girlfriend.  Hey, it’s the Butch way, you got to be respectful; not assume anything.  If you don’t ask; if you don’t together label what you have then it’s not official.  That’s my code anyway.

I’ve known this woman for close to a decade now…she’s been right in front of me and I just wasn’t ready…and in reality neither was she.  Both of us were on other paths; going through other things of our own and were just aware of each other on the fringes…but come to find out we WERE both aware…

The last 10 years I have been involved in some not so good situations.  I was with one woman on and off for many of those years.  I thought we would be together basically forever, but she met a man and realized she wasn’t who she thought she was.  Did it hurt?  Hell yeah.  But I don’t want anything to do with a woman who may be the least bit straight in any way, shape or form – not even a little bit.  So that ended, and ended very abruptly.  It’s for the best, I was “settling” I now see.  I didn’t have that passionate love for her that I need to have for the forever woman in my life. Then I started to get involved with another woman, but turned out she was so deep in the closet that she was kissin the back wall hard…So, yeah, I had some fuck ups along the way here, but it’s all behind me now.

I backed off dating completely; just gave the fuck up and figured I’d just be happier sticking to myself and not getting involved with anyone, it seemed to always be just too damned complicated.

That worked for a good while…then she somehow got my attention and things turned in a different direction. We got to just casually talking at first, and then it became clear that we had both been stealthily following each other for almost 10 years…interacting on rare occasions, but just enough to stay in touch.  We began daily conversations, got into some pretty deep stuff from both of our lives.  Both being bloggers and being each other’s followers, we knew quite a bit about one another; each had watched the other go through a myriad of struggles over the decade. We filled in those blanks; those things that we didn’t disclose in our blogs, the intimate details…lots of very personal stuff we have shared.  I’m not afraid of her hurting me, I’ve let that wall down and damn, it sure feels great.  To finally have someone who I can trusts with my heart.

Fast forward a little bit and I have really connected with this great woman.  She has stolen my heart…in a very good way.  She makes me smile, laugh, think and want to be all that I can be for her – and for myself.   I keep pinching myself to see if this is real; to see if I am really awake and that this is happening for us.  We’ve gotten really close, sharing our fears, our dreams, and our mutual affection for one another.  I haven’t felt this way in a very long time….like since 2007…and I don’t exactly know where this journey with her will take me, but I am sure going to find out.  I’m not letting go now for anything…anything.  I’ve needed her for so long, and now she’s right in front of me right where she belongs.  In my heart and in my arms.  I don’t wanna miss a minute of this…

5 thoughts on “And I don’t wanna miss a thing…”