I’ve done a lot of reflecting over the last 4 days since the SCOTUS decision on Friday, and a Facebook friend suggested that I write a little bit about my thoughts on it here in my blog.  It’s a little bit amazing to look back on the last 35 years of my life as an “out” lesbian; to remember specific events, and to remember what I’ve personally been through trying to live my own life amidst the prejudice and hate spewed at me and my friends, and the LGBTQ community in general through the decades of my life.  More than once I have been directly assaulted for just being who I am – a Butch lesbian.  Even within the community itself I have encountered prejudice, but that’s a whole other topic of it’s own and not what I am talking about here. I will save that for a future blog.

I remember all of the Prides I have attended, the March on the United Nations, Stonewall Inn’s 20th anniversary of the Stonewall Riots, Marches on Washington and other things like marching for the elimination of the DADT policy (Don’t Ask Don’t Tell), the last full display of the AIDS Quilt in Washington DC.  I’ve attended Pride celebrations in DC, NYC, Boston, SF, OKC and here locally.  So many events and protests I have attended over the years that I have probably forgotten a few. There were times that I’ve been in the trenches, and times I have been a bystander. I’ve been an activist and an educator.  I tried to contribute to the fight for equality in all ways I have ever been able to, physically, financially and by being the activist and best ally that I could be.

I’ve fought for equality all my life.  I’ve been “out” since I was 18; known I was lesbian since I knew there was a word for the way I felt from a very young age, and have been fighting for equality ever since then.  It’s amazing to finally see the US have marriage equality for all.  Some may not think it’s such a big deal, but to someone who never thought they would ever live to SEE this happen here it’s pretty freaking amazing.

I know there are millions of people who are very happy about this (61% of the US according to the latest statistics).  And for the millions of LGBTQ folks who live here in the US (not sure what the number could be!  I heard 8.8 million somewhere) — it was a happy day Friday for all of us, not just me.  I got quite a few notes from friends and allies who sent their congrats on the ruling by our Supreme Court.  It was really nice to know I have so many supportive friends and family.  They don’t always understand me, but they do support me and that’s what counts to me.  I really appreciate that they all know how much this means to the LGBTQ community here. 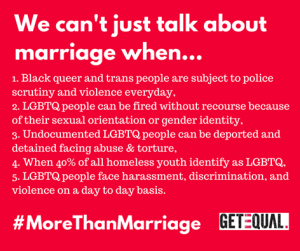 Personally I don’t see myself getting married, but it’s nice to know that I have that option open to me now no matter where I end up living in the USA.  I’m 53 and it doesn’t look like it’s in the cards for me personally.  I don’t exactly know how I feel about marriage even, it seems like an unnecessary formality.  I’ve never been a big one on marriage in general.  But I support those who do choose to get married – gay, straight, black, white or whatever.  Anyone who wishes to be married should be able to do so –and now they CAN!  So, Love Wins, as everyone has been saying.

Much of Facebook was turned into a rainbow on Friday – even the White House lit up the rainbow flag across it’s bricks.  The celebration was enormous throughout the country.  And Saturday many towns had their annual Pride events, plus there were many impromptu gatherings across the country.

And now the fights also have begun.  With Texas leading the way and refusing to issue licenses already.  I don’t think that this battle is over to be honest.  Now that we have marriage equality we’re going to have to deal with much hate and bigotry from those who don’t agree with the Supreme Court’s ruling.  There is still a fight to be had.  We still have to educate and show those who don’t agree why they have no reason to fear us; why “gay marriage” won’t destroy “straight marriage”, as some are saying.  (One evangelical bigot had the balls to say that this will now promote anal sex and pedophilia…where does one even GET that kind of bullshit to come out of their mouths?  Wow).

As the churches and religious right gear up to fight this ruling tooth and nail, I believe that we too should be getting ready for the backlash, and ready to fight back to keep these rights we now have.  In some ways we have opened up a proverbial can of worms here, and the fish are going to be biting hard.  I am a little concerned about what we might see as the dust of celebrations on this ruling settles and the trash talking begins.  I’ve already seen – from a few people who identify as LGBTQ themselves – some of this trash talk.  Yes, there are even people within the community who don’t believe that the Supreme Court had the power to rule on same sex marriage.  So, we are not all on the same page for sure — but are we ever?

There are still many other issues surrounding equality for all that need to be dealt with for many people.  I’m wondering how many people think that the fight is over now that we have marriage equality?